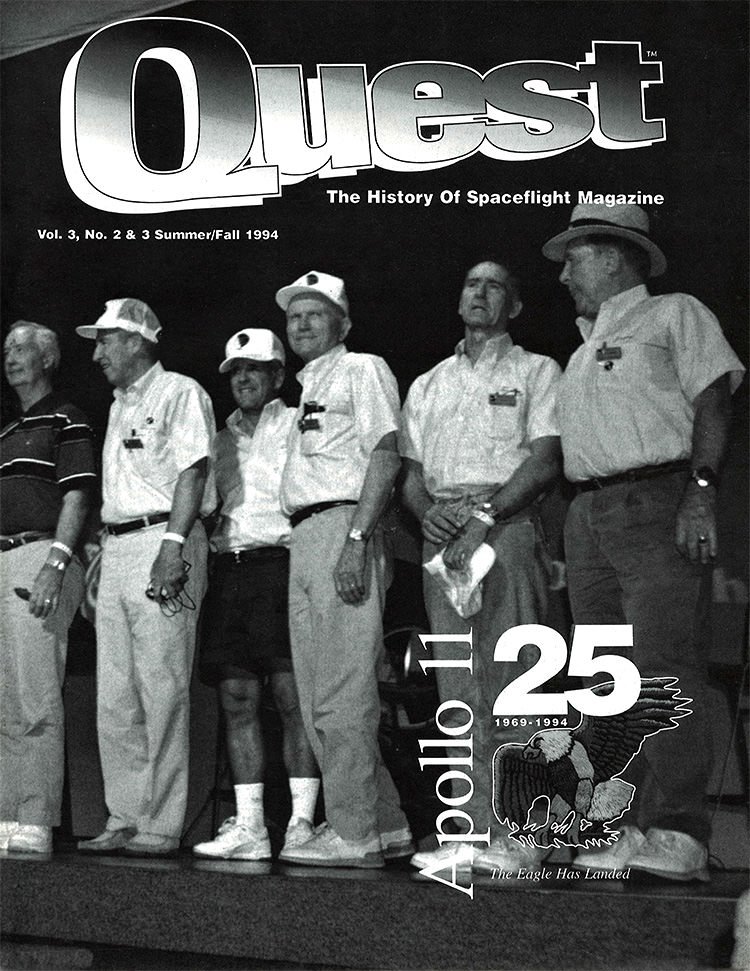 Available as a reproduction. We are out of stock on originals.

Purchase the print edition of Quest Volume 3 Issue #2-3. Free shipping in the USA.

“Apollo 11 at 25″ by Roger Launius
“‘It’s Time to Go’ A Salute to Apollo” by Glen Swanson
“Spider Talk: Builders of the LM Reunite for 25th Anniversary” by Ron White
“Project Apollo Bibliography of Books” by Roger Launius & JD Hunley
“A Race to the Moon: The Flight of Luna 15” by Michael Tilgner
“Moon Shooter: An Interview with Alan Shepard” by Glen Swanson
“Atlas Shrugged: Future of Historic Monument Up in the Air” by Donald Pealer
“The German Space Pioneers: An Interview with Marsha Freeman” by Keith Scala
“Project Adam: The Army’s Man in Space Program” by Anthony Springer
Moon Men: An Interview with Andrew Chaikin author of “A Man on the Moon: The Voyages of the Apollo Astronauts” by Glen Swanson
“Footprints on the Moon: An Interview with Charlie Duke” by Randy Attwood & Keith Wilson
“Celebrating Apollo at Home: A Look at the Various Model Kits Produced of the Saturn V” by Peter Alway
“The Secret Life of the Redstone Missile” by Keith Scala
“What If? Apollo 18,” by Dennis James Gauthier