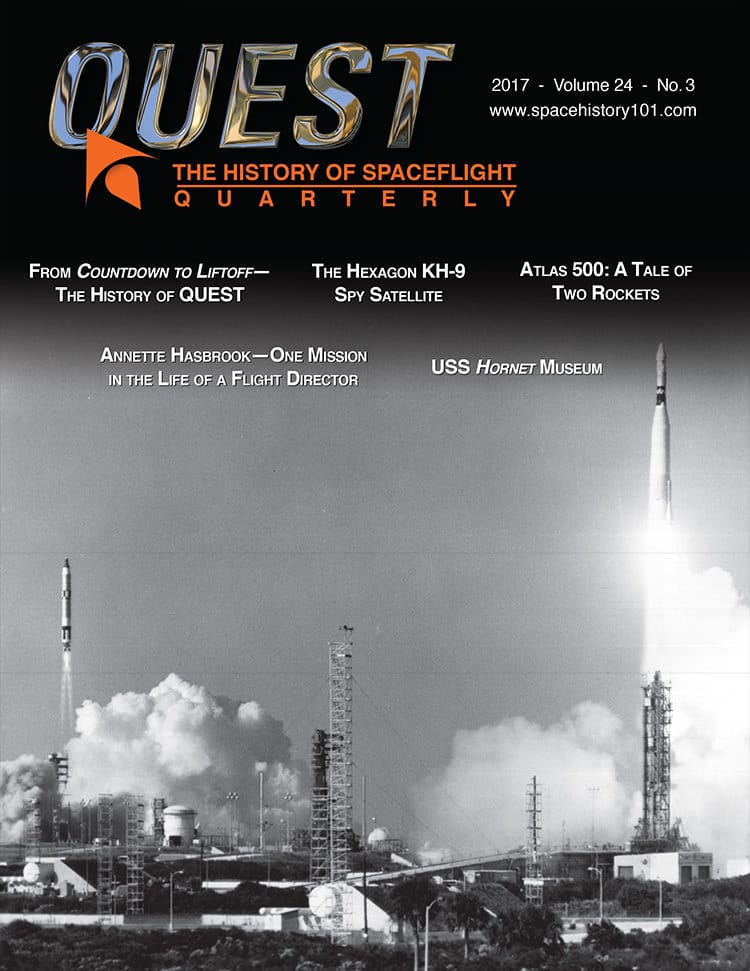 Purchase the print edition of Quest Volume 24 Issue #3. Free shipping in the USA.

“From Countdown to Liftoff–The History of Quest. Part I: Beginnings through the University of North Dakota Acquisition 1988-1998″ by Glen Swanson
“The Hexagon KH-9 Spy Satellite” by Phil Pressel
“Navigation for Apollo” by Edgar Durbin
“Plan, Train, Fly: One Mission in the Life of a Flight Director–An Interview with Annette Hasbrook” by Jennifer Ross-Nazzal
“Atlas ‘Crime Scene’ Photographs Revealed” by Joel Powell
“Atlas 500: A Tale of Two Rockets” by Joel Powell
“The USS Hornet Museum” by Christopher Gainor

“In the Footsteps of Columbus: European Missions to the International Space Station” by John O’Sullivan, review by Roger D. Launius
“Beyond Earth: Our Path to a New Home in the Planets” by Charles Wohlforth and Amanda R. Hendrix, review by Shalina Chatlani
“The Glass Universe: How the Ladies of the Harvard Observatory Took the Measure of the Stars” by Dava Sobel, review by Michael J. Neufeld
“Eyeing the Red Storm: Eisenhower and the Attempt to Build a Spy Satellite,” by Robert Dienesch, review by Daniel E. Opstal