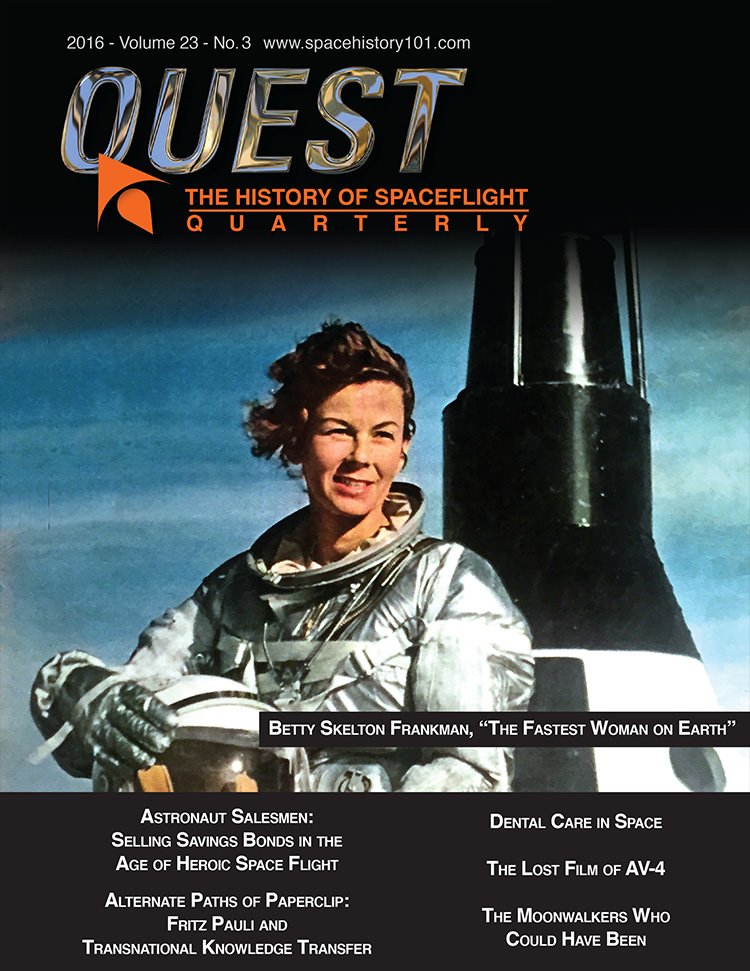 Purchase the print edition of Quest Volume 23 Issue #3. Free shipping in the USA.

“Astronaut Salesmen: Selling Savings Bonds in the Age of Heroic Spaceflight” by Hunter Hollins
“Dental Care in Space” by WIlliam Hartel, DDS
“Alternate Paths of Paperclip: Fritz Pauli and Transnational Knowledge Transfer” by Brian Odom
“The Lost Film of AV-4” by Rob Manning
“The Moonwalkers Who Could Have Been” by Douglas W. Oard
A Conversation with Betty Skelton Frankman, Aviatrix Pioneer and the “Fastest Woman on Earth” by Carol Butler
From the Archives: Sputnik 3 Photographs from the 1963 World’s Fair
From the Archives: Fifty Years Ago…

“Into the Black: The Extraordinary Untold Story of the First Flight of the Shuttle Columbia and the Astronauts Who Flew Her” by Rowland White, review by Amy Paige Kaminski
“American Astronautical Society History Symposium Proceedings” by various authors, review by Scott Sacknoff
“Space Shuttle Legacy: How We Did It and What We Learned” edited by Roger Launius, John Krige, and James Craig, review by Valerie Neal
“Canadian Spacewalkers” by Bob McDonald, review by Dr. Christopher Gainor
“Abandoned in Place: Preserving America’s Space History” by Roland Miller, review by Carolyn Russo
“Enhancing the Hubble Vision: Service Missions That Expanded Our View of the Universe” by David Shayler with David Harland, review by Christopher Gainor
“The Hubble Space Telescope: From Concept to Success” by David Shayler and David Harland, review by Christopher Gainor
“How Outer Space Made America: Geography, Organization and the Cosmic Sublime” by Daniel Sage, reviewed by Jennifer Levasseur
“Seeing Like a Rover: How Robots, Teams and Images Craft Knowledge of Mars” by Janet Vertesi, review by Roger Launius

The Decline of Russia in Space